Grindr in the Vatican 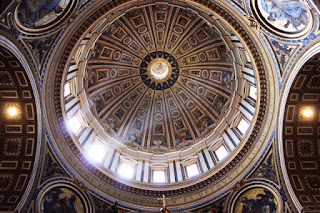 After reading a story about a gay escort named Francesco Mangiacapra, who exposed 40 actively gay priests and seminarians in Newsweek, the New York Post and NBC News, I decided to find out for myself exactly what's going on in the Vatican and how common gay sex really is there. So, I booked a flight to Rome for my birthday and lubed up for some in depth research. What I discovered was not exactly surprising, but interesting, nonetheless, and it left me wanting to know more.

My original intent was to write a story about Grindr in the Vatican, but once I got to Rome and started doing research on my story, the scope expanded a bit. So, this is an article primarily about the use of gay dating apps like Grindr in Rome, but more broadly, it's also an article about the gay scene in Rome and the secret lives of gay clergymen in the Catholic church. My method of research was very informal and the depth of this article is confined to what I could learn from talking to strangers on gay dating apps and at bars in Rome. It probably goes without saying that Grindr is not widely used among clergymen in the Vatican. According to one man I spoke with on Grindr, there once was an app specifically for priests, bishops, and cardinals to seek out gay encounters called Venerabilis. This, apparently, was shut down after an Italian news site called Gloria exposed it. So, what now?

Well, according to my source, it depends on what level you are within the church. Lowly priests are on their own, sometimes using Grindr or other dating apps, and often not disclosing that they are a priest. The higher ups apparently can call on a servant or assistant to make arrangements if they would like to have some fun.

According to one nice young man that I met from Paraguay, there are people on gay dating apps who are specifically looking for priests, cardinals or bishops and, that therefore, there must be clergymen looking for fun online as well. This young man also told me that he has happily been in a long-distance relationship with a priest that he met on Grindr, from Poland, who comes to the Vatican regularly. But, according to another person, most of the real encounters between upper-level clergymen and other guys is done at extra-Vatican property: buildings owned by the church outside the Vatican. Also, most of the encounters are with very highly paid escorts, the likes of which also serve foreign dignitaries and powerful men from around the world.

Apparently, this information is pretty common knowledge in Rome, but most Italians generally mind their own business. Also, most men prefer women most of the time and the vast majority of escort services provided to clergymen in Rome are women. One person on Grindr told me that there's a vast underground network connecting clergymen with essentially anything they want. Some have referred to the underground network as the "Homo Mafia". And of course, it's reasonable to assume that some of these desires are pretty kinky considering that priests are human, just like the rest of us. My sources told me that serious dating among clergymen or between clergymen and regular guys is rare due to how taboo it is still considered by the church. I was also told that if you get cozy with a high-level clergyman that you could live in the Vatican for free with your man, but others told me that this is not true because of how high the security is at the Vatican. So, in summary, the gay dating app scene in the Vatican is pretty dull, unless you know someone. That seems like common sense.

But what was less common sense to me was how dead the gay scene is in Rome in general. For a city of over 4.5 million people, one would expect more. There were no official gay bars, but there are a few bars near the Colosseum that obviously cater to a gay crowd. There are also, like in most European and American cities of that size, lots of private rave-like events with DJs in big warehouses on the outskirts of town. It's not hard to figure out where the event is taking place. You just ask any guy at one of the local not-gay bars and you will learn. Rome is, understandably, still quite a conservative place. But there are attractive men and fun things to do if you are willing to sniff around. It's certainly worth a visit.