An Open Letter to Corporations: Your Time is Up! 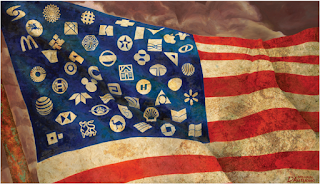 Written by Jeromy Carpenter
Published in Adbusters in June of 2014
https://www.adbusters.org/article/an-open-letter-to-corporations/

I’m about to celebrate my 33rd birthday here in New York City. Then, in August, I’m heading off to law school in San Francisco in the hopes that I can practice environmental law some day. Corporations have had a huge impact on my decision to go to law school and my desire to work for non-profit and government organizations.

I’ve always been a very vocal guy and have written for a number of gay publications from Seattle to Fort Lauderdale. I’ve been a champion for gay rights and the rights of those living with HIV in America today. But the issue that concerns me the most right now is the damage being caused by corporations to humanity and the planet as a whole. It’s a race to the bottom as they drive down wages in America, export jobs overseas to unsafe factories that collapse and burn, killing women and children, and destroy the environment with their insatiable addiction to the almighty dollar. They will stop at nothing to bring profits home to their shareholders with reckless abandon for workers and the Earth.

Recent decisions by our Supreme Court here in the United States have undermined our rights as citizens by granting personhood to corporations which are neither bound by geography nor citizenship the way the rest of us proletariat human beings are. They cannot be held accountable for the death and destruction they cause the same way an individual can. When a corporation kills hundreds of people, they pay a relatively small fine for the lives they took, even if they knew in advance that their actions would cost human lives.

Corporations cannot be put to death like humans can for killing people. On top of this, the Supreme Court continues to grant more and more power to the top 1% in ways that our founding fathers never fathomed and would most certainly not approve of. Most recently, the Supreme Court decided that there shall be no cap on the amount of money that an individual can donate to political causes.

Corporations are replacing citizens as the real power in the United States and globally. They can threaten to pick up and move to any country they want if they don’t find the local tax code friendly enough, unlike individuals who have to apply for a visa and might get declined. Corporations are super-humans with no respect for life, civil rights or anything besides money. They will pillage and destroy the earth and mankind until there is nothing left to take.

Corporations have become the de facto rulers in a world where politicians are beholden to wealthy contributors to win campaigns. Lobbyists write the bills that our politicians sign and inform our leaders as to what they can and cannot say about any given subject in front of a camera. This is no longer a democracy and I’m not just talking about America. Corporations are now multinational “citizens” who are reshaping global policies to benefit their own investors and executives at the expense of workers and the environment. If we don’t stand up to this new form of feudalism, we will surely be enslaved by it and we will watch our future selves, our children and all life on Earth be eroded and destroyed for the sake of money for the top 1%.

That is why I am making it my own personal mission to skewer these bastards and make them pay for the damage they’ve caused. I will do everything in my power to roll back the super-human status that they have been granted and get their money out of politics. We need reform and it starts right here at home. We can’t let corporations continue to pit city against city, country against country and brother against sister in this nasty race to the bottom. It’s not too late to stop these assholes and I’m going to spearhead the movement. Corporations; I am your worst nightmare.