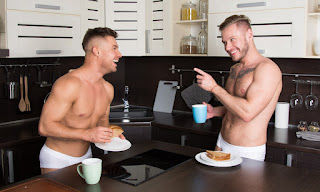 Sebastian recounts the joy of sharing breakfast with his fiancé, and how part of that morning ritual makes them part of a new generation of happy, healthy, loving gay couples.


The Couple that Eats Together…

My fiancé Jewell and I are very lucky that — at least since we became a serious couple — we have made a habit of having breakfast together. Even before we moved in (and before the Sunday I lost my iced coffee chasing our errant Black Lab mix for nearly two miles), we’ve enjoyed starting the day with this lovely hour. Sometimes, we comment on the latest gibberish coming from the White House. Others we just enjoy the quiet. At some point I always seem to comment on what a beautiful day it is or will be?


What Do You Want for Breakfast?

We generally go with eggs, toast, and a few slices of tomato dressed in olive oil with fresh basil and a touch of salt and pepper. Sometimes we throw a piece of ham into a mix. The ham we bought in abundance on sale after Easter, so these days it appears less and less often. Though there are still remnants in the freezer, dropped into black beans for added flavor and protein.
For a while the ham became sort of an homage to an episode of The Golden Girlsin which Sophia bought a crate of sardines at a wholesale club. “How about some ham? Why? BECAUSE WE HAVE SO MUCH OF IT!”
However, it’s the act of breakfast – regardless of what we eat – which makes our day special. We sit at the table. Jewell is Southern by birth, so he keeps cayenne pepper at the ready. Then, we lay out our medications for the day. According to Jewell, we have to take them at the exact same time; like shots of tequila at a bar. Next to his plate, he has his HIV medication, Biktarvy. Next to my plate, my Truvada – also known as PrEP.


Did You Take Yours Yet?

If the answer to this question is yes, the other’s reaction borders on petulant: “You didn’t wait for me!” Sometimes it’s our first laugh of the day.
We also take medication for anxiety. Jewell used to take a multivitamin, too. But his doctor told him this isn’t necessary unless you’re suffering from some nutrition deficiency. I guess it helps that he has a fiancé who tries to make sure he has balanced meals every day. But I digress…
Both of us are aware that this ritual signifies that we are part of a new generation of gay couples. In the recently-released Netflix sequel to Tales of the City, an older gay man reminds a gay millennial that they fought for us. (Though I am a few years older than a millennial, I too reap the rewards of the activism of men now in their fifties and older.) They fought for us so that medical science would treat HIV and AIDS as a medical condition, not a death sentence. They fought for our ability to love, both emotionally and physically, without fear of contracting or spreading the virus. In the new Tales, older, positive-but-undetectable Michael is nervous about his younger, negative boyfriend engage in certain kinds of sex, even though the latter is on PrEP.
Someone in Talesdescribes it as merely being able to have sex without condoms. But for me – and many others I hope, it’s about breaking down fear, erasing worry, combatting the still-abundant prejudice of HIV stigma, and loving each other fully.

Once Upon a Time
In my native Philly, a decade ago and before PrEP, I was seeing a positive, undetectable guy. Because we wanted different things, our relationship didn’t work out.
I soon after moved to Miami. Around the same time a close friend of mine found himself falling for a guy newly in our social circle who was positive. Ultimately, he couldn’t do it. But then again, he may not yet have understood what being undetectablereally meant.
What those older generations fought for is not lost on Jewell or me as we take our respective medications. It means we don’t have to choose who we can be with based on status or stigma. It helped us choose each other. Maybe that’s why we wait to pop our pills at the same time.